Let us be frank about this: we think last mile delivery has a very attractive upside, but we think it is too challenging to be an attractive investment.

The difference between the two are the risks involved.

Luckily, we know exactly what it takes for founders to change our mind.

The Allure of Last Mile Delivery

Last mile is the most expensive line item of the total shipping cost.

With eCommerce exploding over the last 12 months– and as we mentioned in Part I and Part II—labor costs associated with fulfillment and shipping have also increased: a whopping 26.5% in 2018 compared to 16.6% in 2007.

Last mile represents more than 50% of total shipping costs, making it the most expensive line item.

This is not surprising because unlike other logistic processes that can be done in batches, last mile delivery operates in a single piece flow.

A driver cannot really drag a container load of packages and drop them in one place.

It is the least productive and most difficult step to automate out of the entire logistics processes, making it also the most lucrative opportunity that many startups are vying for.

The last mile delivery market is poised to grow from $12.2 billion in 2021 to $41.7 billion by 2028 at 19.5% CAGR, according to GlobeNewswire. Much of this is driven by the rising consumer expectations of same day and instant delivery —a segment that is growing at as much as 40% per annum, according to data from the World Economic Forum.

Consumers are becoming increasingly sophisticated in what they demand from last-mile delivery. Some 30 to 35 percent of consumers would pick same-day or instant delivery if it were available at low prices.

Consumers are aware of what is possible, and they expect to be able to choose from many ways to get the products they want quickly and conveniently. But despite this expectation, their willingness to pay for this service is limited, forcing retailers and logistics partners to shoulder the costs.

To understand this space from an investment perspective, there are two things we need to think about: what is delivered and how it is delivered. Let’s dive into them:

Ecommerce was not the only segment that was booming during the pandemics; food and grocery delivery also had their time in the limelight.

What’s in the box; sandwich, soda, or parcel?

Sixty percent of consumers order food delivery at least once a week for convenience despite the heavy price tag of 14-30% of total order value, making this a promising segment.

There are three things to consider when looking at the attractiveness of the categories:

Looking at these three metrics, it is not surprising to see that e-grocery holds the greatest opportunity.

At more than $90 per basket, e-grocery has the highest ABS. Moreover, there has been a massive shift towards on-demand grocery delivery, which commands delivery fee at $5.99-7.99. This suggests that consumers are willing to pay for speed. Because of this, customers are likely to be present, which reduces delivery handling complexity.

While Ecommerce has similar basket size with $81 ABS, consumers are generally satisfied with delivery within 3 days. Customers are not likely to be present when goods are delivered, which complicates the drop-off process.

Amazon Prime Now has expanded only to 20 cities in the US before seeing its demise. Food delivery—despite its much greater sense of urgency—has a much lower basket size which puts a natural ceiling on the willingness to pay to keep the delivery cost to basket size attractive.

To hit the road or not

Road is the fastest of all options to bring goods from A to B; it is also the most complex and extremely regulated.

A sidewalk robot, on the other hand, is designed to travel at just one fifth of the speed of its road counterpart. Many are equipped with tele-operators driving the robot, adding in a layer of safety.

Sitting in between the two is a robot operating in a bike lane.

On one end, we have a fully autonomous road robot and on the other end we have a manually-operated sidewalk robot.

The trade off lies not only in technological maturity and regulatory challenges, but also in total cost of ownership and long-term competitiveness.

Autonomous vehicle technology is relatively mature, but in a “barbell fashion.”

Big Tech—such as Waymo, Cruise, and (arguably) Tesla, (even if its car just killed two people), as well as relatively mature startups like Aurora and Zoox— possess a tremendous amount of data and capital that Level 5 autonomy is within reach.

This level of maturity, however, is generally out of reach for early stage companies.

The biggest hindrance to autonomous delivery companies, however, is not technology. It lies in the deeply rooted inefficiencies of regulatory approval.

To even pilot the delivery, the company needs to obtain government approval. However, there is currently no governing body for the autonomous delivery company to get a federal level approval, which leaves only one path to market: gaining approval municipality by municipality.

For perspective, there are over 89,000 municipalities in the US.

Adding delivery volume into the equation

A fully autonomous road robot is likely to have higher upfront costs but lower long-term operating costs, and vice versa for a manually-operated sidewalk robot.

Still, there is another consideration to think about, and that is the delivery volume per hour.

With the size of the sidewalk robot being capped, it can only fulfill, say, two orders of food delivery before returning to pick up another order. This places a natural ceiling to how efficient a sidewalk robot can be.

All things considered, we believe a semi-autonomous bike lane robot offers the best trade off.

Bike lane robots offer both the necessary speed and size of vehicle to have sufficiently high delivery throughput. A semi-autonomous solution that allows one person to operate multiple robots at the same time would make it more cost competitive in the long-term.

Having human operators operating the vehicle at a reduced speed as an added layer of safety is helpful for early commercialization. Moreover, it is much more likely for a bike lane robot to graduate to a road robot.

What it takes to change our mind

It follows that our favorite option is semi-autonomous bike lane robots tackling the e-grocery market, as demonstrated on our market map in Figure 1.

Still, this opportunity is arguably the best of the worst. 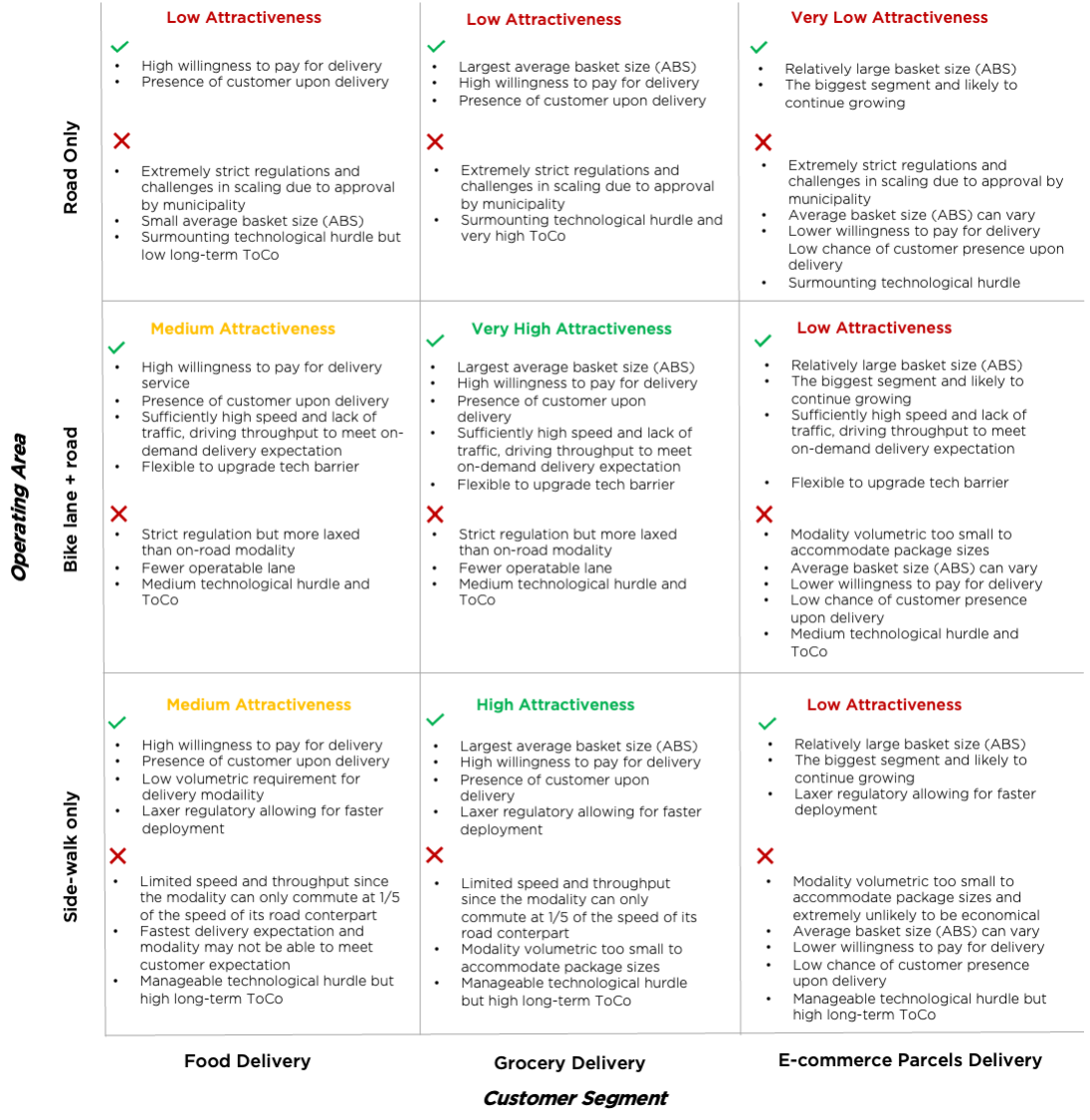 Last mile delivery is very challenging in just about every dimension. Consumers expect faster delivery at lower costs every year, just as they would expect a cheaper LED with significantly better image quality.

This means they are willing to pay less, despite faster delivery only adding to the operating cost, squeezing long-term margin for businesses.

While the technological hurdle is high, the regulatory hurdle is even higher. Imagine Tesla crashes into ten more people, and then Cruise crashes into dozens more. Suddenly, the federal government mandates an in-depth scrutiny over ALL autonomous vehicles, causing all municipalities to pull back.

We have no way of capping this risk, and it has nothing to do with the company itself. This, in our view, is the single greatest risk in the autonomous vehicle space.

When you add this to the gross margin pressure a last mile delivery company faces, you begin to see why this is not a very attractive opportunity.

With the downside having unlimited risk while the upside has a diminishing risk, the only thing that is augmenting the upside is the expanding market, which e-grocery sees the highest at both volume growth and willingness to pay.

For this reason, we ask for an unusual amount from the last mile delivery company. We ask that they:

If you are one of those companies, you know where to find us.