Deal counts in the same period, however, grew by about 40%. This means that the round size gets larger and, as you may have guessed, most of the money flows into the late stage.

More capital injection naturally raised valuation. While valuation hikes within deep tech had been relatively benign compared to other sectors, Q4 was when we started to see material differences in pre-money valuations. 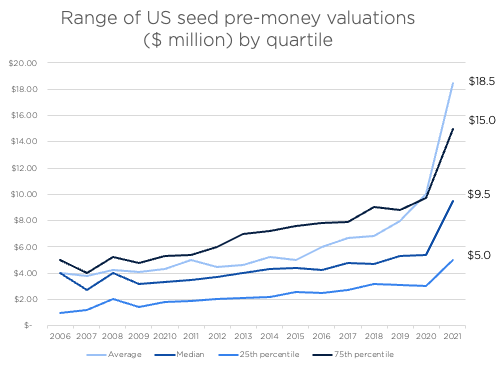 Figure 3. Range of US seed pre-money valuations ($MM) by quartile

The valuation spike is real and has hit Deep Tech. When we founded Creative six years ago, a typical seed round was $2-3MM, and a $5MM would be regarded as a super-speed round. A $10MM round was rarer than a unicorn.

Today, a typical seed round that comes across our desks is around $5MM. An $8MM seed round is rare, but not unheard of. A Metaverse company, Alta, closed a $12.4MM seed round at $62MM valuation, while Pakistan’s fintech company, Tug, raised a similar amount at a $100MM valuation.

The correction is so acute that Tiger Global— one of the most active investors in 2021—decided to walk back on term sheets already signed and inked, cutting back on valuations by as much as 40%.

Throughout 2021, we continued to ask ourselves: should we pay the premium? At a certain point, it was clear there was no other choice if we wanted to continue making deals. But the bigger and better question is how much premium is acceptable? What is “too much” and what would still make money?

Are you paying too much to buy in?

It is natural to answer this question by looking at the entry pre-money valuation and the potential exit valuation. After all, if an investor buys low and sells high, they make a lot of money.

But that’s not how it works in the venture world. Companies need to raise multiple rounds to build their traction and exit. The number of rounds from initial investment to exit and the dilution between rounds are sometimes much more pronounced factors.

Consider an example of a seed investment at three pre-money valuations: $10mm, $15mm, and $20mm. To maintain similar ownership, the round size would have to increase, which is exactly what has been happening over the past two years.

This is counterintuitive because one would expect that to generate the same amount of return, the exit valuation needs to be higher if the companies raise capital at a higher pre-money valuation. But this is only true if the number of rounds to exit and the dilution remains the same.

Now, if we take the same exercise and do not increase the amount of initial investment round size, then the three identical companies will presumably perform identically. This means it will take the same number of rounds and dilution to exit. The company with twice the pre-money valuation will require almost twice as high the exit valuation to generate the same MOIC. This is the scenario that most investors think about.

To pay more and get more, investors need to think about capital efficiency. Valuation and the round size go hand in hand. But more importantly, it is the use of proceeds and the ability to make use of those greater round sizes that matter most. If the company raises at a 33-50% higher valuation but can reduce the number of rounds to exit by one round, then it’s probably worth it.

In this day and age, it is not about not paying more. It is about finding a company that does better with more capital.

And then it all depends on your portfolio construction

At Creative, we make most of our money through our initial investment. Many firms do not, and instead make their money in their follow on rounds. They encourage companies to raise mega rounds so they can pour more money in because that’s how their strategies work.

If that’s the case, paying more will not make much sense. It is better to buy in cheap, let go of those bets early, and put more money into later rounds. But in a time when buy-ins are expensive, the cost of this strategy is simply higher.